Ask an Atheist Day was a success.

There were perhaps four or five somewhat heated (or somewhat respectful) debates with only a few more (often humorously intended) questions. Most of the activity at the table was atheists letting us know how cool we are, grabbing a couple of our custom name tags, and putting down emails to get in touch.

The amount of support was not unexpected but rather pleasant. Steven was a tad disappointed with the number of brave theists who actually asked questions- he thought there’d be more. 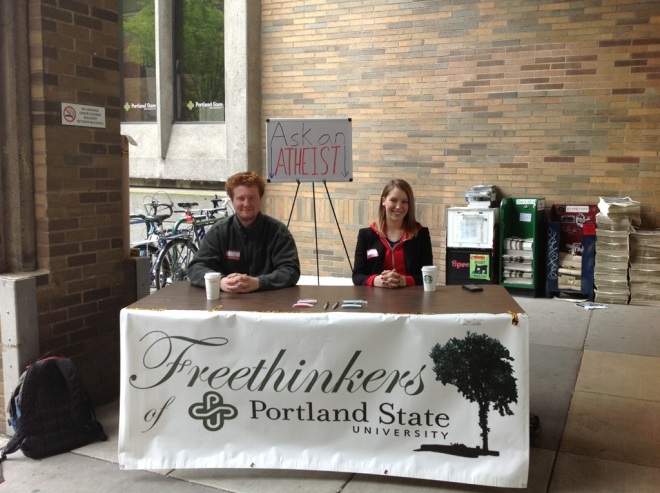 Born on April 13, 1949, in Portsmouth, England, Christopher Hitchens wrote for a variety of English magazines before moving to the United States in 1981. Hitchens established himself as one of the leading intellectual writers of the late 20th and early 21st centuries, willing to offend his readership with his controversial positions on matters such as religion, art, politics, war and literature. He died in Houston, Texas, on December 15, 2011.

Christopher Hitchens was born on April 13, 1949, in Portsmouth, England. His father, Eric Hitchens, was a commander in the British Royal Navy, which required the family to travel frequently. (Hitchens’s brother was born in Malta in 1951.) While his father argued that the family couldn’t afford it, his mother, Yvonne, insisted on sending young Hitchens to private school, saying, “If there is going to be an upper class in this country, then Christopher is going to be in it.” And so, at age 8, Hitchens was sent off, ending up later on at the Leys School in Cambridge.

In 1967, he began attending Balliol College in Oxford, where he joined a sect of Trotskyites called the “International Socialists.” Although he was a staunch member of the political left, Hitchens made connections across the political spectrum.

In 1970, Hitchens graduated from Balliol with a bachelor’s degree in philosophy, politics and economics and moved to London, where he wrote for the Times Higher Education Supplement. By 1973, Hitchens moved on to the left-wing weekly New Statesman, where he became acquainted with writer Martin Amis.

Tragedy struck that same year, when Hitchens’s mother committed suicide in a pact with her lover in an Athens, Greece hotel room. She left a note behind, addressed to Hitchens, essentially saying that one day he’d understand. When Amis wrote Hitchens a sympathetic note later on about the incident, it sparked a deep, lifelong friendship between the two writers. Hitchens wrote for the Evening Standard and the Daily Express, before becoming the New Statesman’s foreign editor in 1979. He held the position until he moved to New York City in 1981.

The 1980s: New York and Washington

A year after moving to New York, Hitchens relocated to Washington, D.C., where he wrote a column called “Minority Report” for The Nation. During this period, he also wrote the books Cyprus (1984) and The Elgin Marbles: Should They Be Returned to Greece? (1987). Also in 1987, his father died of esophageal cancer, the same cancer that would kill Christopher Hitchens 24 years later.

In 1989, Hitchens broke with the left after death threats were made against his friend Salman Rushdie with the publication of The Satanic Verses. Hitchens defended Rushdie, citing his right to freedom of expression, but he was surprised that others from the left failed to do so and openly denounced them. This event seemed to mark the point when Hitchens would be perceived not merely as a leftist but also as someone who would lambast either side for perceived transgressions.

A year later, Hitchens released The Monarchy: A Critique of Britain’s Favorite Fetish, in which he condemned the royal family and the media’s treatment of them, and Blood, Class, and Nostalgia: Anglo-American Ironies, in which he examined the lopsided cultural exchange between the United States and Great Britain. In 1992, Hitchens began writing for Vanity Fair.

The 1990s were generally a time of great productivity and greater controversy for Hitchens,
with his output coming in the forms of books, essays and television appearances. As he did with the royal family, he often attacked what he perceived to be public figures raised to the level of gods, or at least myth, and began appearing on such talk shows as Frontiers and Charlie Rose, tenaciously engaging opponents in political debate.

Always finding new idols to topple, in The Missionary Position: Mother Teresa in Theory and Practice (1995), Hitchens assailed the previously untouchable reputation of Mother Teresa and claimed that she supported dictators, including Haiti’s Jean-Claude “Baby Doc” Duvalier. And once again crossing party lines to critique a beloved figure from the left, Hitchens parsed the various misdoings of U.S. President Bill Clinton in No One Left to Lie To: The Triangulations of William Jefferson Clinton (1999).

The 2000s saw a change in Hitchens’s subject matter, if not his tone. In 2002, he published Why Orwell Matters, followed by Thomas Jefferson: Author of America in 2005 and Thomas Paine’s Rights of Man: A Biography in 2006—all more traditionally academic than most of his previous books. He also continued to rile the political left when he persistently argued in favor of an invasion of Iraq, the deposing of Saddam Hussein after the September 11, 2001 attacks, and George W. Bush’s post-9/11 policies. In this vein, he released a series of essays entitled A Long Short War: The Postponed Liberation of Iraq, which laid out his reasoning behind supporting military action.

In 2007, Hitchens came out with God Is Not Great: How Religion Poisons Everything, where he criticized virtually every religion on earth and began occupying a prominent place in the atheist movement, although he dubbed himself an “antitheist.”

Hitchens’s memoir, Hitch-22, was published in 2010, and Hitchens announced during his book tour that he had been diagnosed with esophageal cancer. He continued to make public appearances while undergoing treatment, frequently discussing his condition in the context of his religious disbelief and shunning the idea of a possible deathbed change-of-heart. The Quotable Hitchens: From Alcohol to Zionism, a collection of his one-liners, and Arguably: Essays, a collection of cultural and political commentary, were released in 2011.

On December 15, 2011, in Houston, Texas, Hitchens succumbed to his cancer, leaving the literary world a rich legacy of ideas about civilization and humanity’s place in the world.

Today’s meeting was a continuation of yesterday’s presentation and discussion. Steven finished his overview of the themes for the spring term: Battling Pseudoscience, Pseudoskepticism, and Conspiracy.

Pseudoscience:
An idea or belief system that tries to use scientific language and/or emulate scientific processes but fails to abide by the rigorous methodology and standards of evidence that characterize true science.
Interesting topic we discussed:
The ratio of things one wants to hear to things one does not want to hear in pseudoscience vs legit science.

Pseudoskepticism:
What is it? It is used to refer to those who declare themselves merely “skeptical” of a concept, but in reality would not be convinced by any evidence that might be presented.
Really good article to check out

Conspiracy:
What makes something a conspiracy?

We discussed these topics and methods or techniques to fight these oppressive thinking methodologies.

Yesterday focused on the principles of critical thought. Critical thinking is NOT just thinking about something hard or for a long time. It’s simply not.

However, it is the list after this paragraph. Each item on this list is not a difficult concept or task to grasp and the average 5 year old is capable of executing most of them. The trick is application.

A critical thinker:
1. Is open-minded and mindful of alternatives
2. Desires to be, and is, well-informed
3. Judges well the credibility of sources
4. Identifies reasons, assumptions, and conclusions
5. Asks appropriate clarifying questions
6. Judges well the quality of an argument, including its reasons, assumptions, evidence, and their degree of support for the conclusion
7. Can well develop and defend a reasonable position regarding a belief or an action, doing justice to challenges
8. Formulates plausible hypotheses
9. Plans and conducts experiments well
10. Defines terms in a way appropriate for the context
11. Draws conclusions when warranted – but with caution
12. Integrates all of the above aspects of critical thinking

The guests this week are eight53. They are a wonderful rock band. They share some good stories and play some tunes. What a nice group of fellas.

This week’s podcast is about a few different things but a show with Troy Carter can’t be boring. Listen in as the topic of discussion changes faster than the Pope’s public image.

Bernie Dehler is a Humanist Chaplain. He is an atheist activist and probably one of the nicest guys anyone will ever meet. The Rationalist and Bernie discuss a wide range of topics from Humanism to Robotic overlords.

The podcast can be found here.

Here’s the link to the podcast

We discuss mystical addiction and how the words we use affect our thought processes.

The above link will take you to a site that will thoroughly challenge how you think- even if you’re a seasoned freethinker. It is a regularly updated blog that changes everyone who reads it.